skip to main | skip to sidebar

Always inspired by the Himalayan stories, I finally had a chance to visit them this August to September. We had an amazing gang with the strong youth Cyrill, the wise man Elias, the wild cowboy Aras and myself for some comedy value. Even though the weather didn't play along, we still had some great climbing days with jokes flowing in spades and good time guaranteed.

We were helped a lot by Prem and his team from Potala adventures. They organized all the transfers, horsemen and the cooks as well as accommodation in all the places we stayed. Their help made our trip a breeze in terms of the logistics. Highly recommend their services!

What follows is a bunch of photos and probably way too much text, so RAYOR :)

Three of us flew from Zurich and met up with Aras in Delhi airport to hit the road North, crossing Haryana and Punjab states to reach Himachal Pradesh, where we stopped in Manali for a few days to stock up with the food for the upcoming weeks. Our amazing cooks Rovi and Indra had a masterplan, so we mainly just nodded our heads when asked. We knew instantly, that we're not going to be hungry.


After loading the van with all the food, we had another day's drive to Urgos village. In order to reach it, we had to cross the pile of dead bodies (read more) and drive along Chandra and later Cheneb rivers to Udaipur where we turned off to follow the Miyar river up to Urgos.

Urgos itself is a pretty village, already at 3.5k altitude, yet due to the fact that it is at similar latitude as Tunisia, supports many fields for growing vegetables. When we were entering the valley, it was the season of sweet peas and on the time of leaving, they were harvesting cabbages. The people, though hard working, look content with their life and generally happy. Every inhabited valley has a highschool and even small villages, a few hours in the hike still have very well maintained primary schools.

Two days walking from Urgos with support from some pretty mules saw us reaching the base camp, right below a few nice pieces of rock and some boulders. Across the river looms the king of the valley - Rachu Tangmu, which hosts a few mixed climbs up its face.


Pretty happy to be up in the base camp with blue skies, we immediately put together a plan to climb one of the nearby hills, called Toro peak. Being so close to the base camp it has a bunch of routes. We found the most attractive one to be the Peschel-Schaar line from 2011 so we started up it, but after about 30 meters of climbing, we deviated left to climb via a pretty roof, followed my some face climbing and another roof that we overtook by its left side. A few more pitches took us to the bottom of the upper bowl, where we tried seeking for the best rock on the left face, probably finishing left of the Lopez-Pfaff 2008 line topout. We called our variation 'Wake up tea'. Being the usual me, I forgot the camera in my tent so you'll have to ask Elias for the action pics.

With the sun still shining, we packed our bags and set of for the Takdung glacier. A long and grueling walk up took us through some cool landscapes with unclimbed peaks and walls all around us. 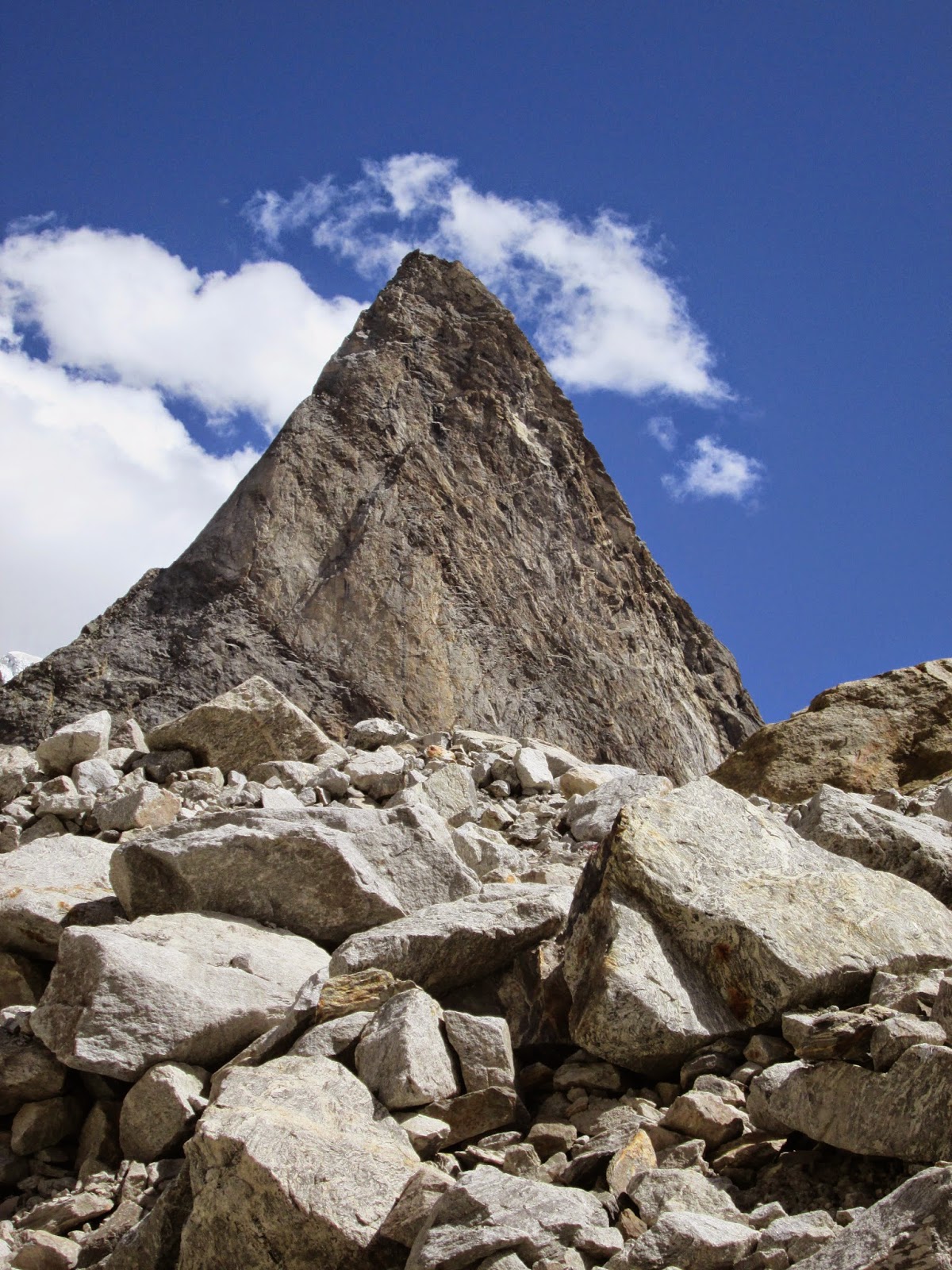 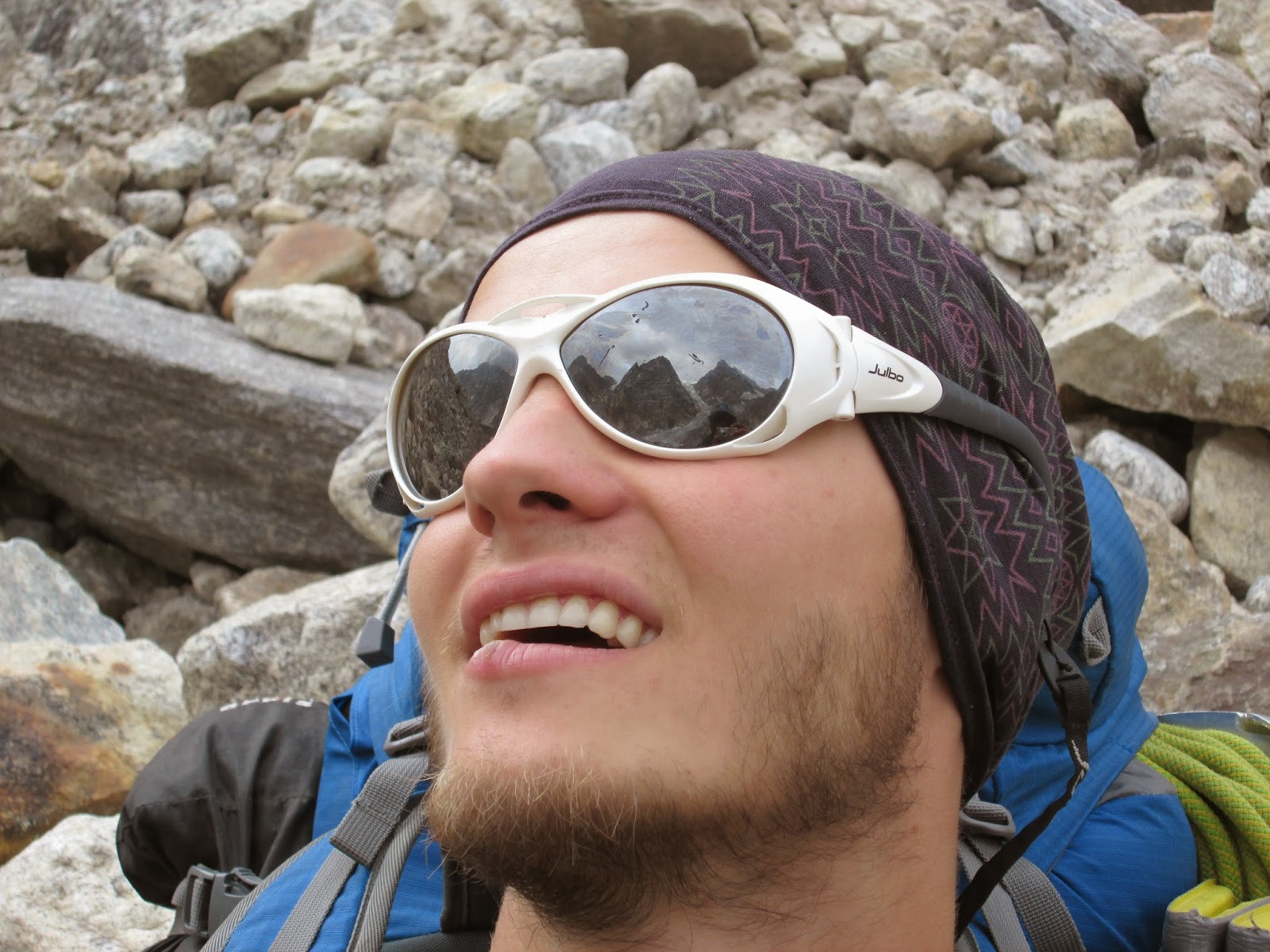 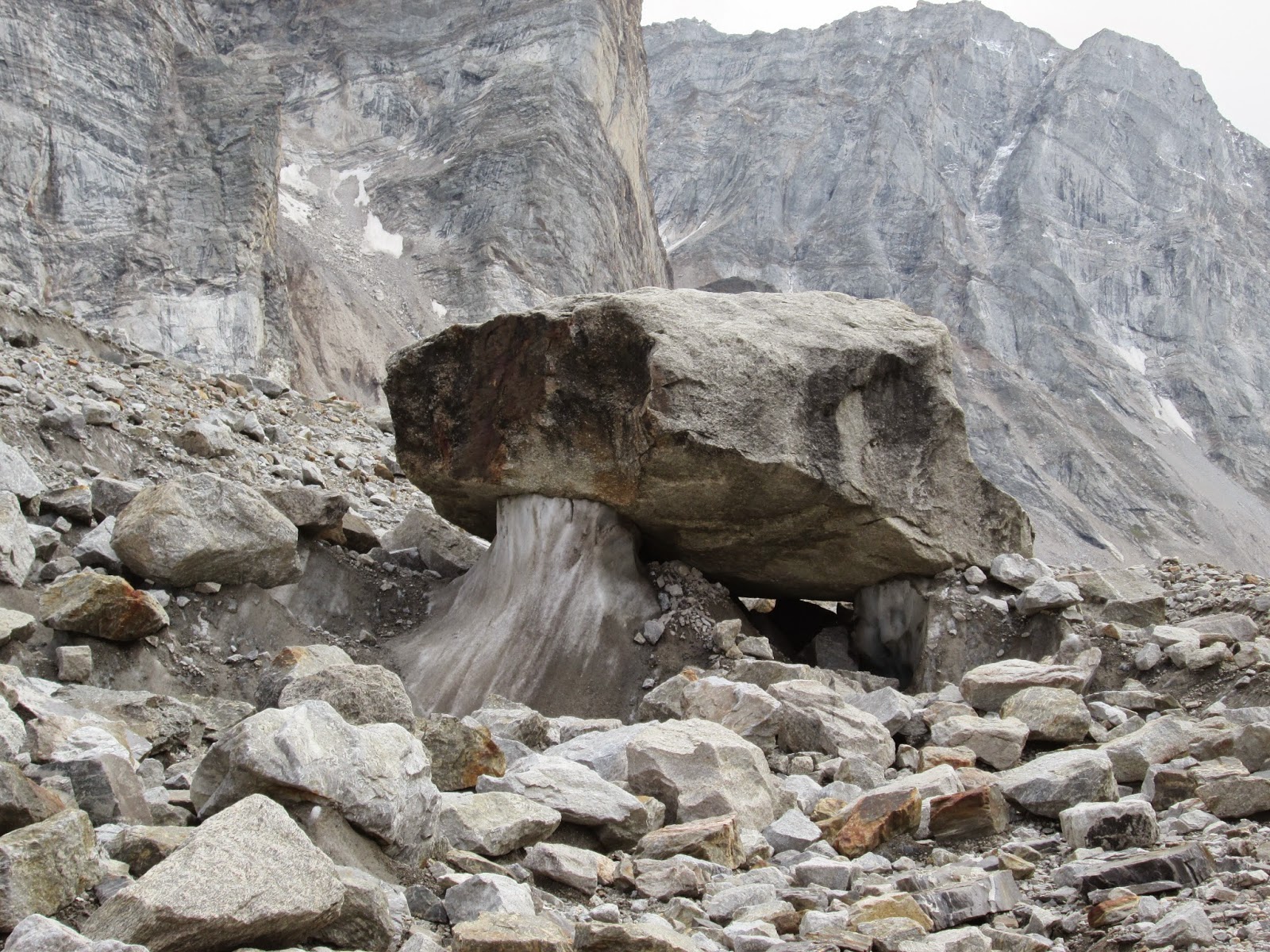 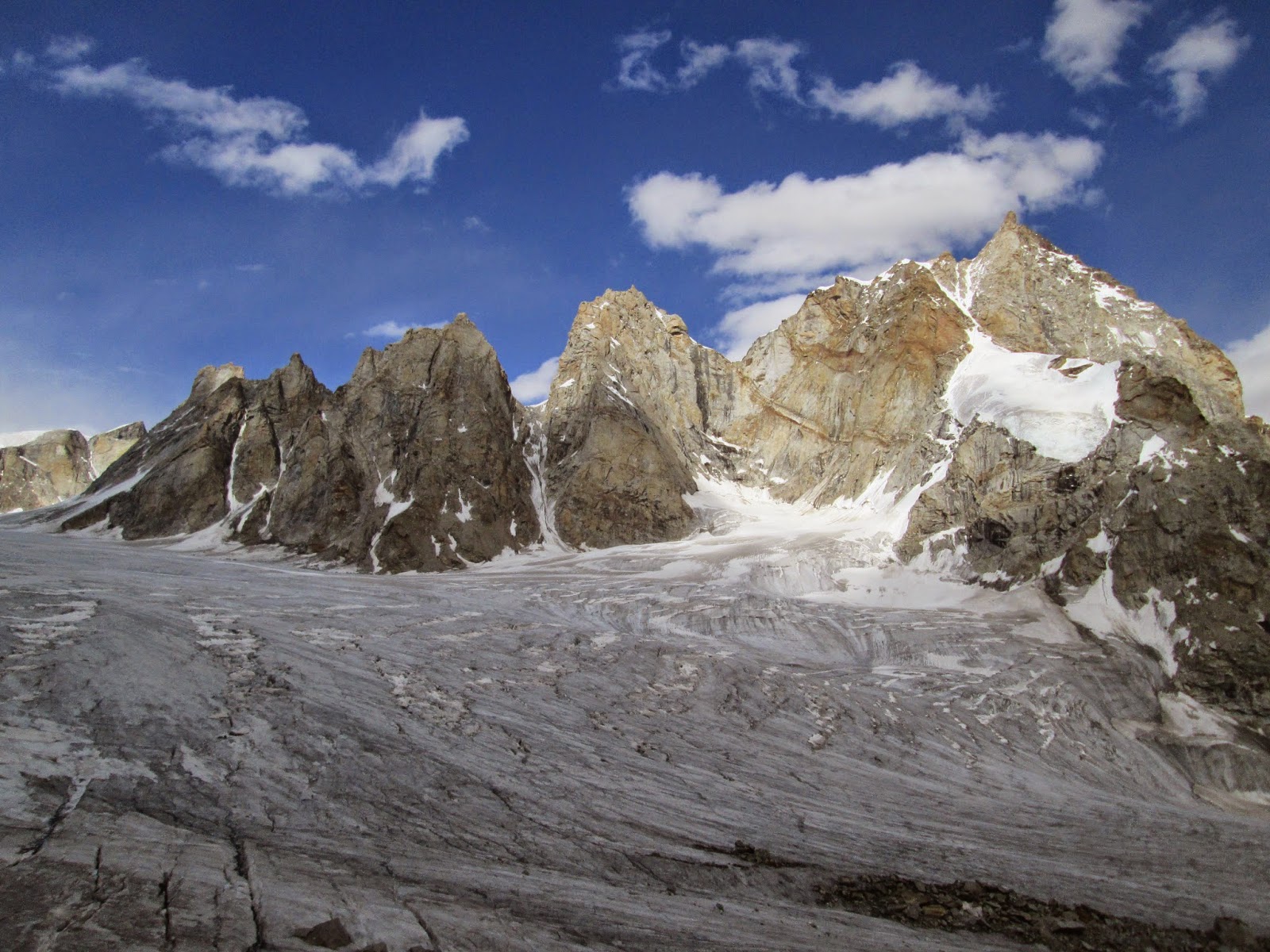 Already at the entrance of the glacier we saw many very nice lines to be climbed and we picked one on the unclimbed south-east face of Lotus peak. After reaching the upper glacier, we found some flat spots, set in for the night and tried to get our psyche up which wasn't easy since the weather had been getting progressively worse with every day. On the planned summit day we woke up to gloomy skies and snow, so we called the climb off. Later on that day it cleared for a bit, so we went for a walk, hoping to tick the hill, which has been called Mt Maudit.

In the end, it was only me and Cyrill who were going up the upper fields of Mt Maudit, others saving themselves for the granite. Cyrill was going strong and I was panting in his footsteps uphill. At one point when I thought I am about to catch up with him, I heard a high-pitched metallic noise, as if a carabiner was falling. I then realised that I was struggling to keep my balance and noticed that the mount of my right crampon had broken.

This got me rather scared, so I retreated to the last ledge, where I made a makeshift holder out of the prussik I had in my pocket. It wasn't too stable, so going up was out of the question for me and Cyrill agreed to join me on the way down. Moreover, he was kicking some serious real-deal-old-school steps for me so I wouldn't have the risk of rolling of my crampon. Thanks mucho, dude! This made a scary situation into a rather mellow one. Few hours later, we were brewing more tea and hoping for a starry night.


And then we got our chance! Morning was pretty, we set off for climbing. I took the first block, which was rather easy in the beginning, but then we were faced with a huge wet corner system, so I traversed more to the left onto the steeper part of the face and there it was - a beautiful splitter on a steep yellow granite - the stuff that dreams are made of! I had a great fun and significant pump by the time I reached the next ledge and a nice belay. Cyrill took over for some more nice climbing which took us to the ramp on the upper face, which was quickly dealt with by Aras. Finally, Elias took over for the smashing last few pitches and got us on to the summit plateau. So seven hours and thirteen pitches after starting the climb, we were putting on crampons again for the last few meters of snow ridge. 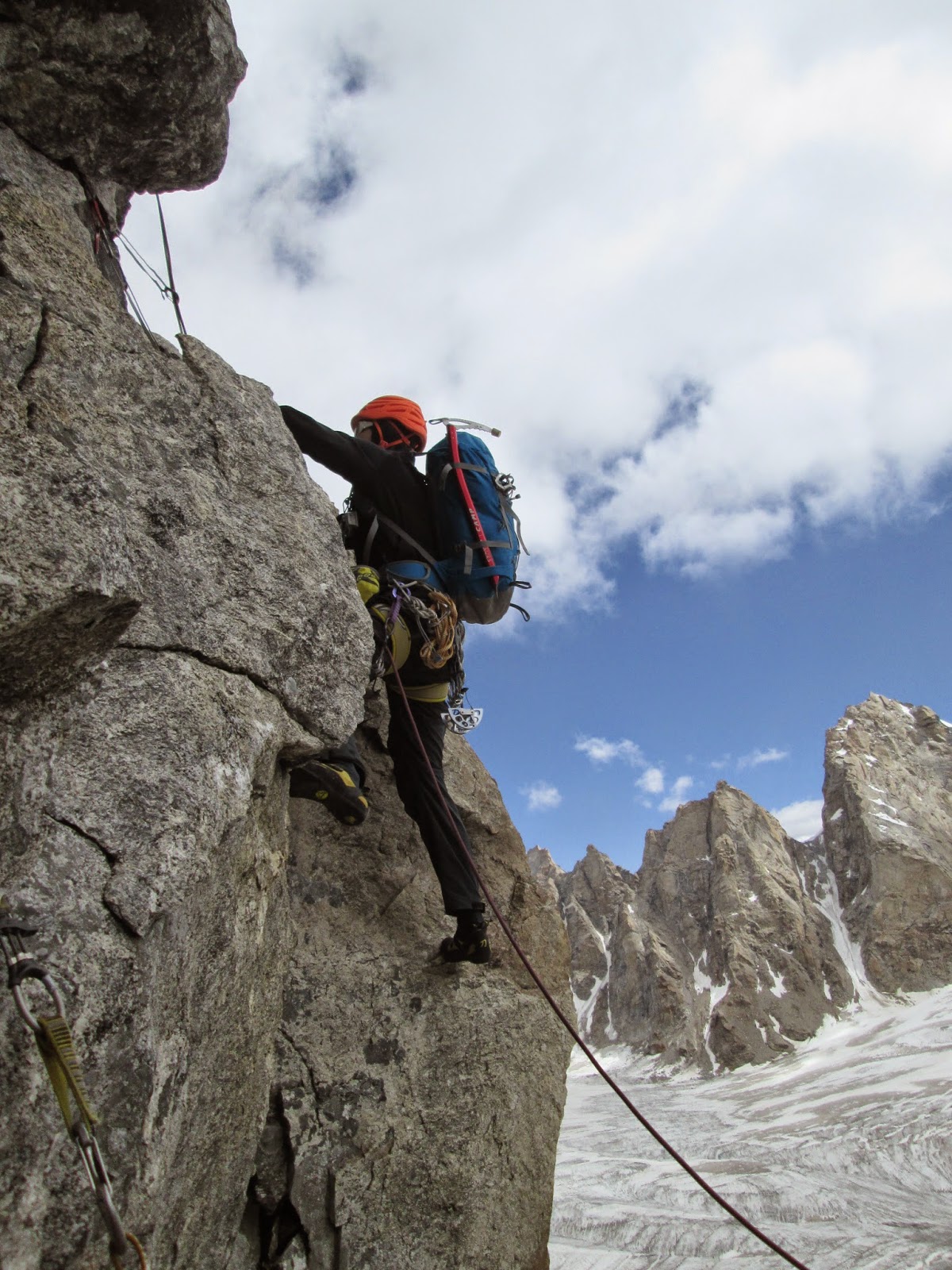 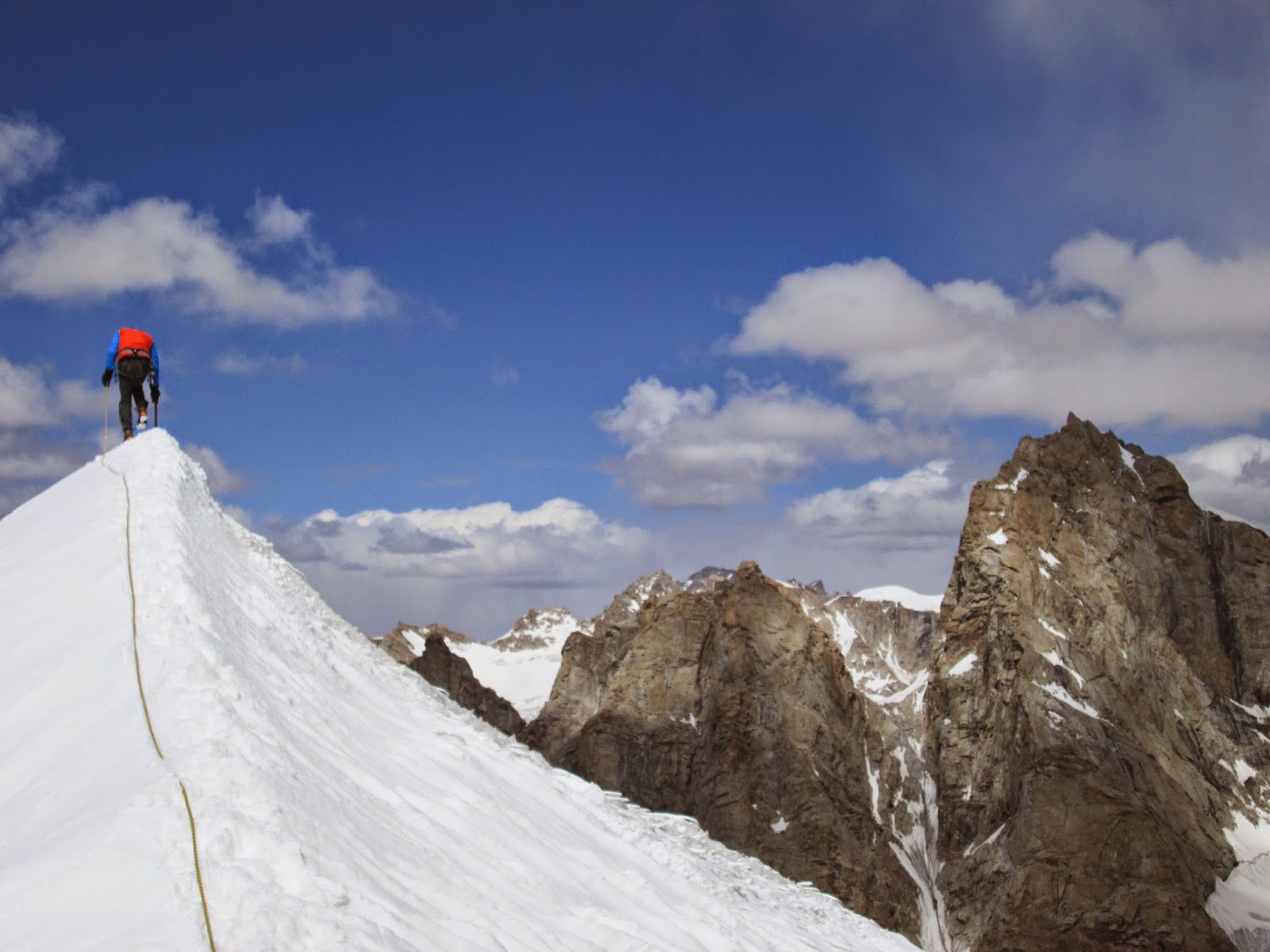 When we reached the summit we saw the a huge bad weather front was coming right at us and we had to go down fast. It started snowing on the second rappel, then it turned to sleet, then to a complete downpour with temperatures dropping again and as we approached the ground. 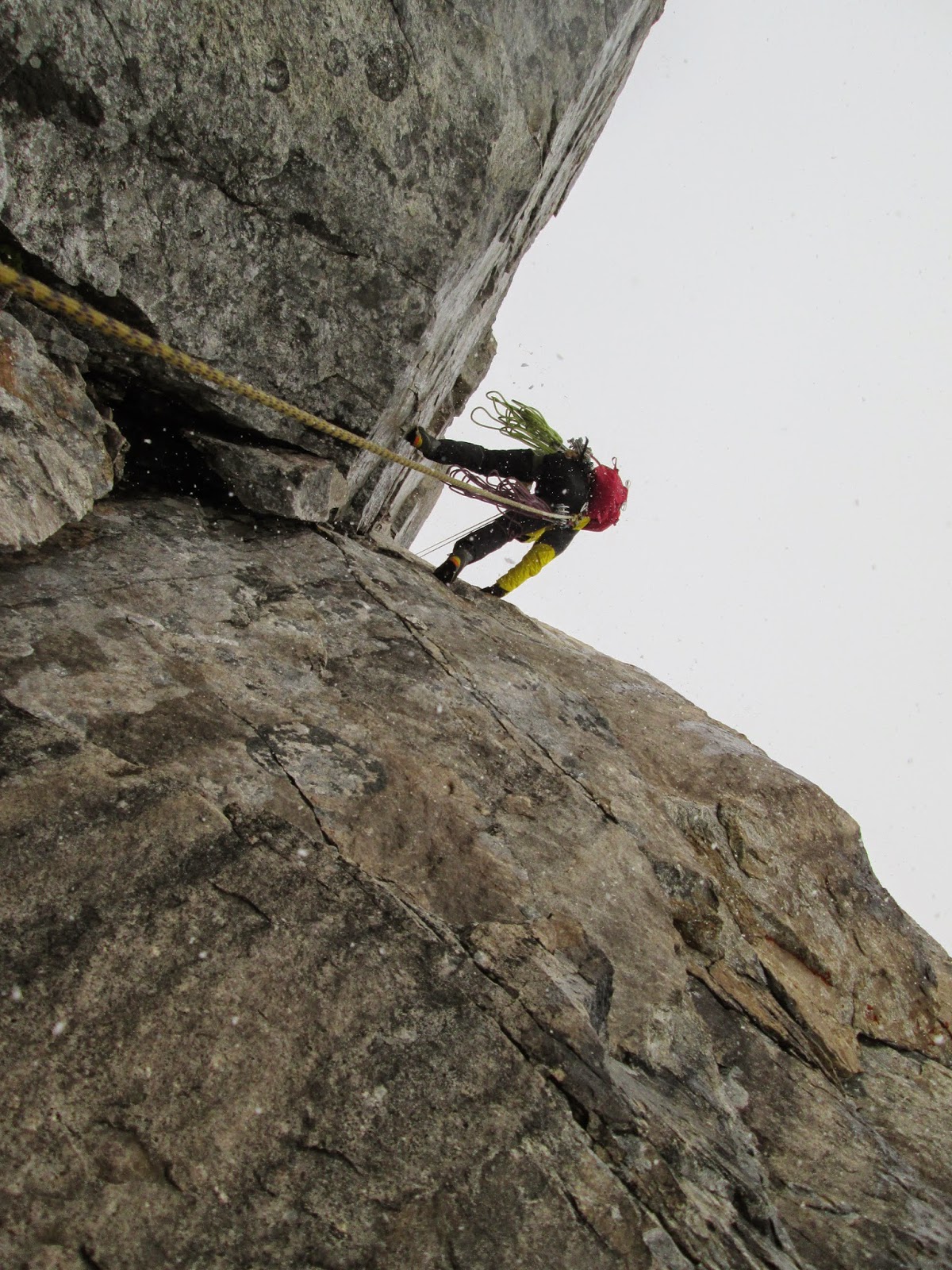 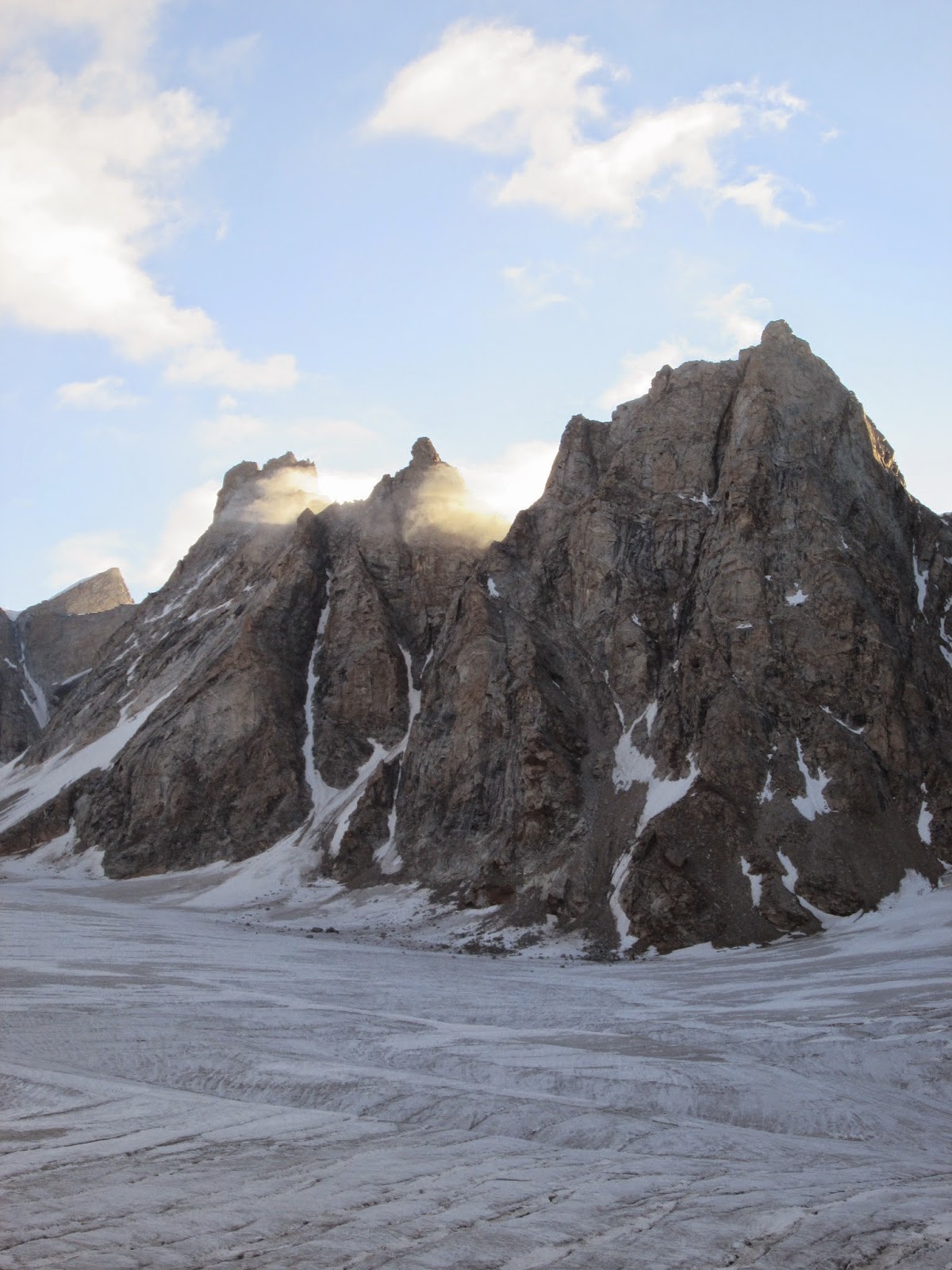 We went back to the base camp to recharge, but the weather kept us from climbing for a while. Did some reading, on a bright half-day we would go and boulder on the nearby rocks. 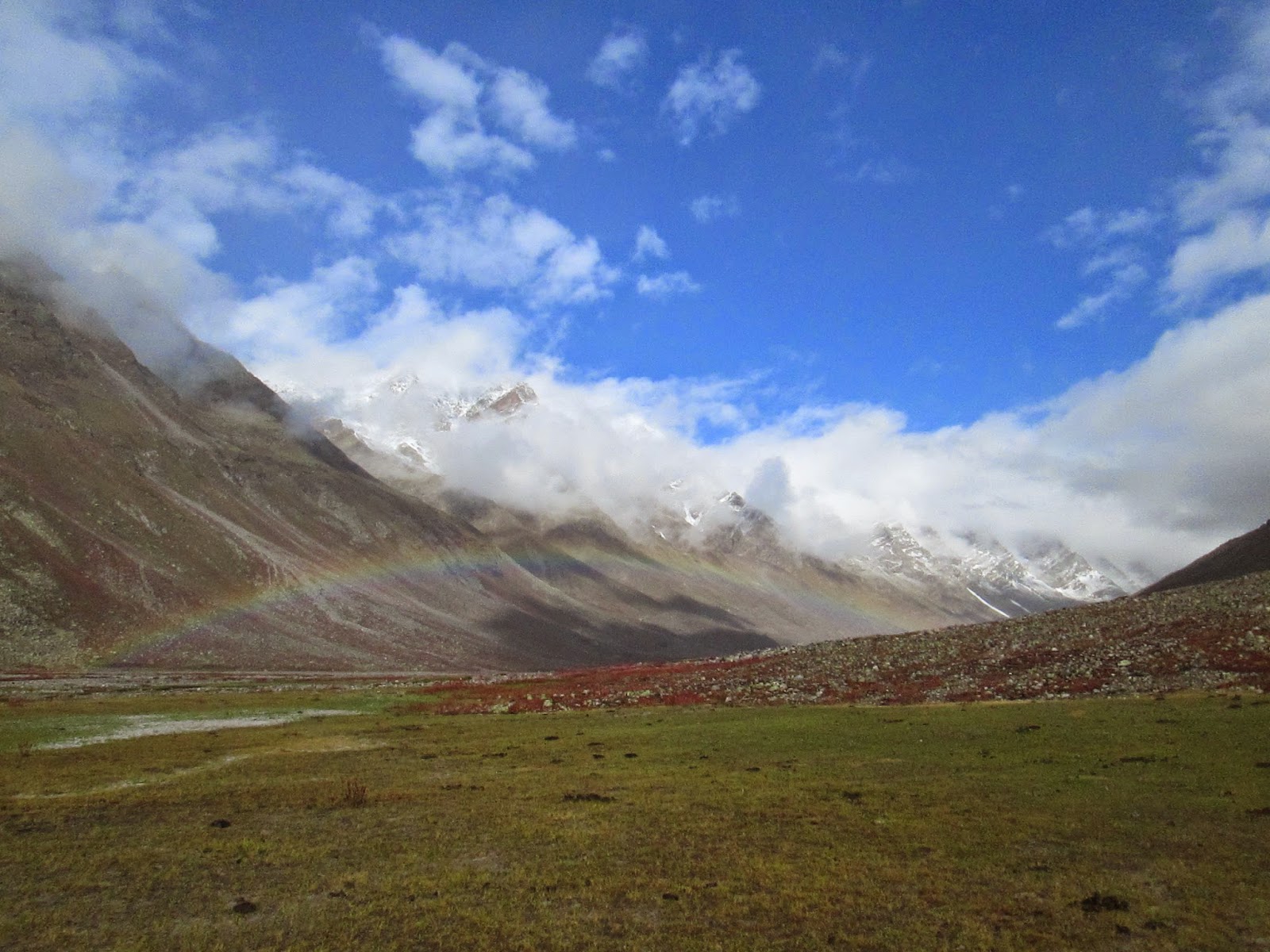 We even made an attempt on the Iris peak once, but the snow and wet rock made us turn around.


After many days of waiting in seemed to have cleared. So we ate, packed, and went one more time up the Takdung.

Sadly, The weather didn't really improve and by 10 am on the first day of approach it was getting gloomy already. We still hiked all the way up, but the snow kept pouring down and we went down to the base again.

So we were down in the basecamp, with time running out and water running everywhere, still hoping that a sunny day would dawn. A drama was building up. We would sit and talk about how accessible climbing is back in Europe, and how good the weather forecasts are. Yet, we ere eager to get one more chance here. So when one night we saw some stars, we got excited and set off for the Iris peak one more time. This time we knew the first half of the route well so it went fast and the second half was easier than expected, so we ended up right before the final headwall with another drama - the clouds were already above us and the snow started. We had to be fast. Some hesitation on board was soon overcome and we went to the top in three more short pitches. Summit was sweet and even though we knew that we'll have to go down in a downpour, we hung around for a while, enjoying the last minutes in these high mountains. 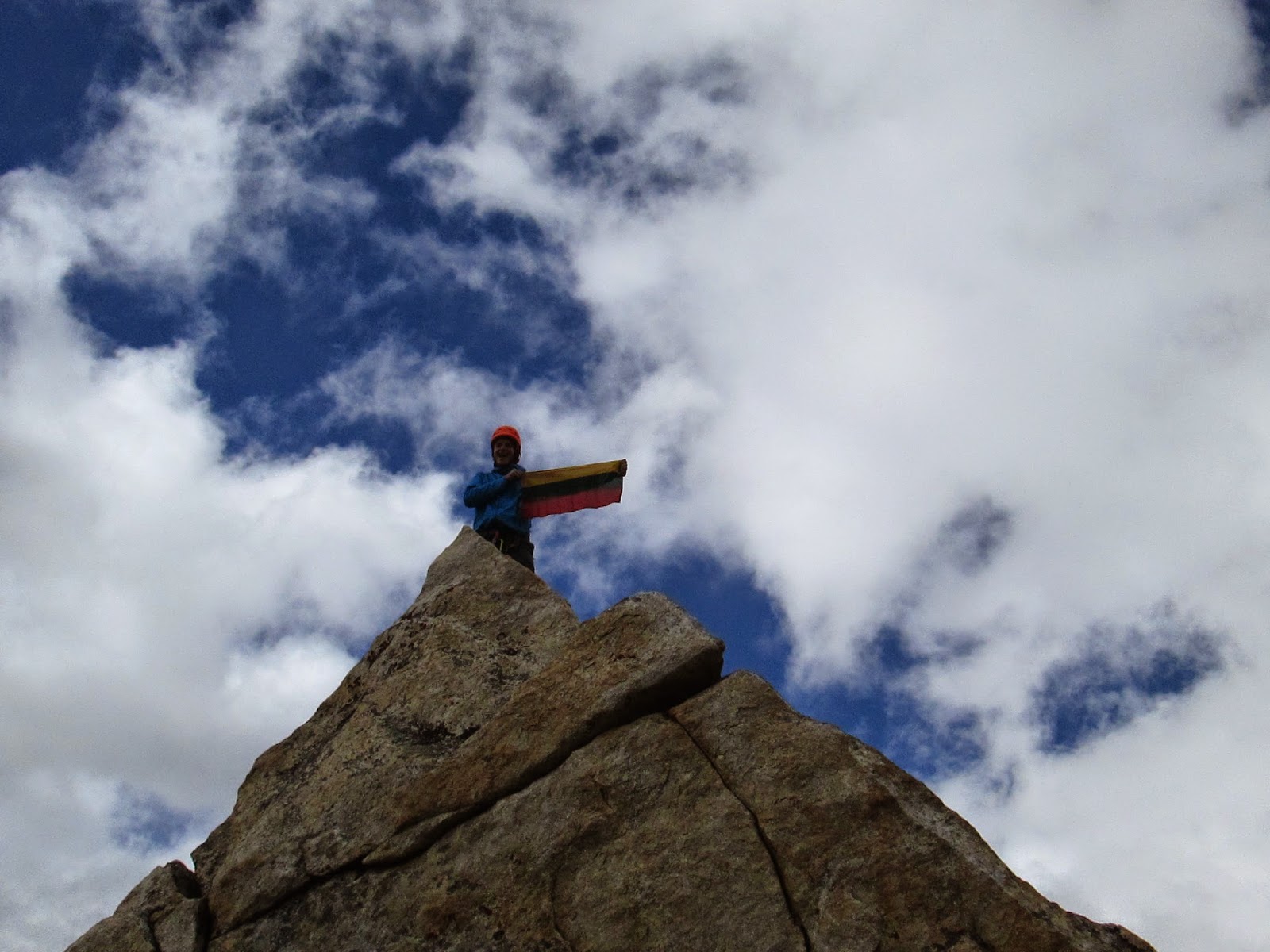 And so soon it was over. We packed, had one last cup of tea in the valley and hiked down.


Still a few days in Delhi allowed us to de-acclimatize from the life in the mountains. 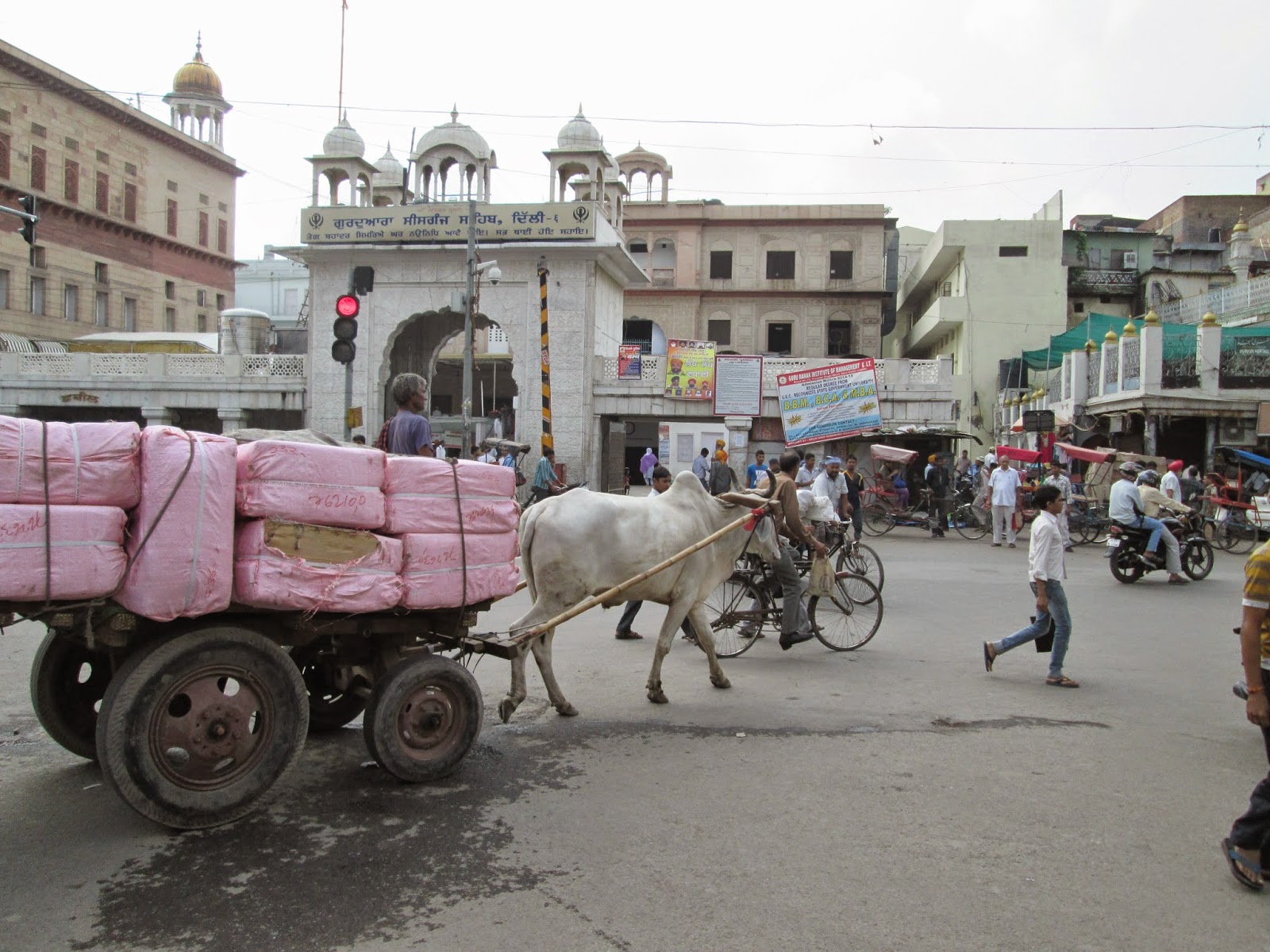 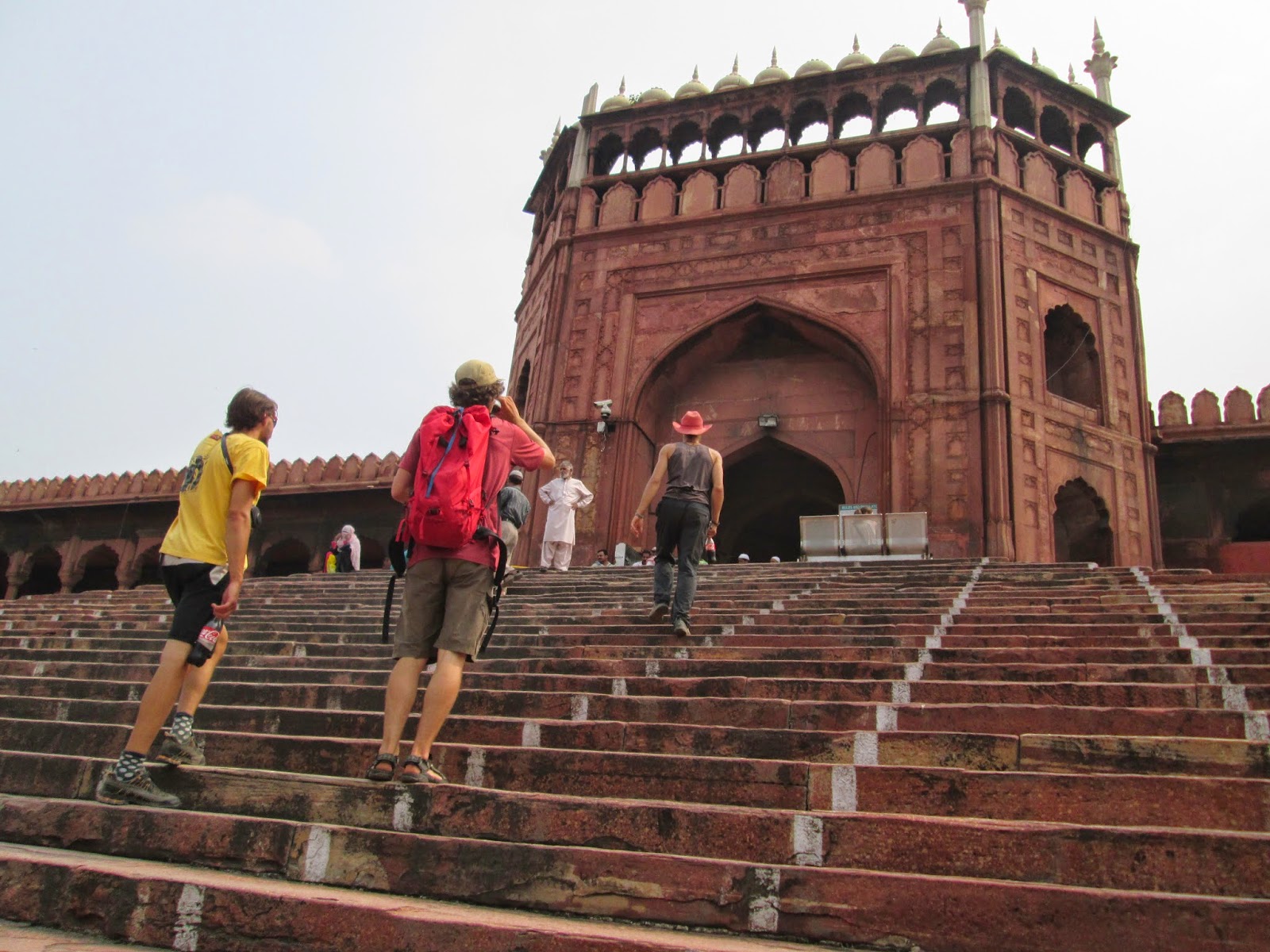 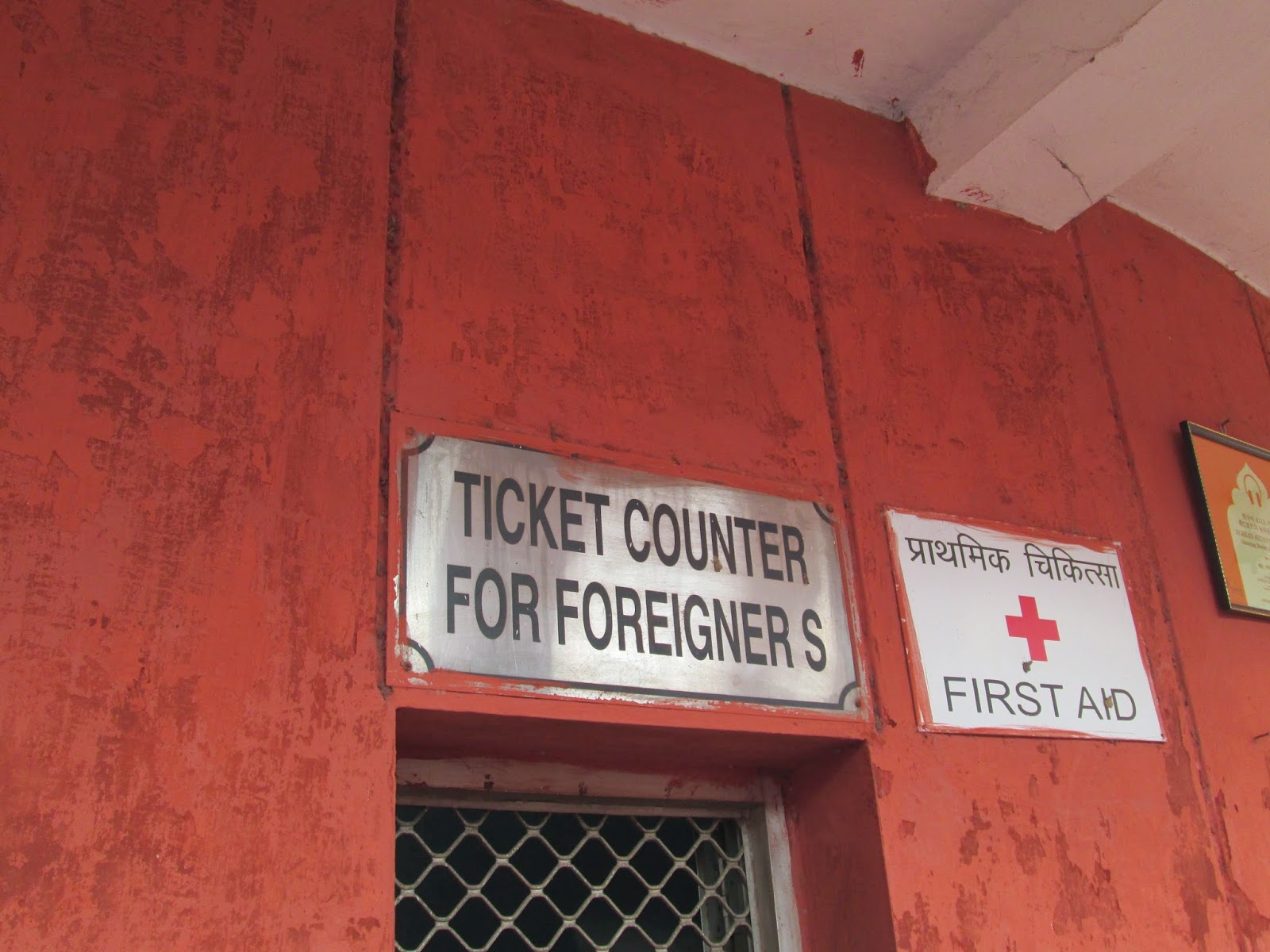 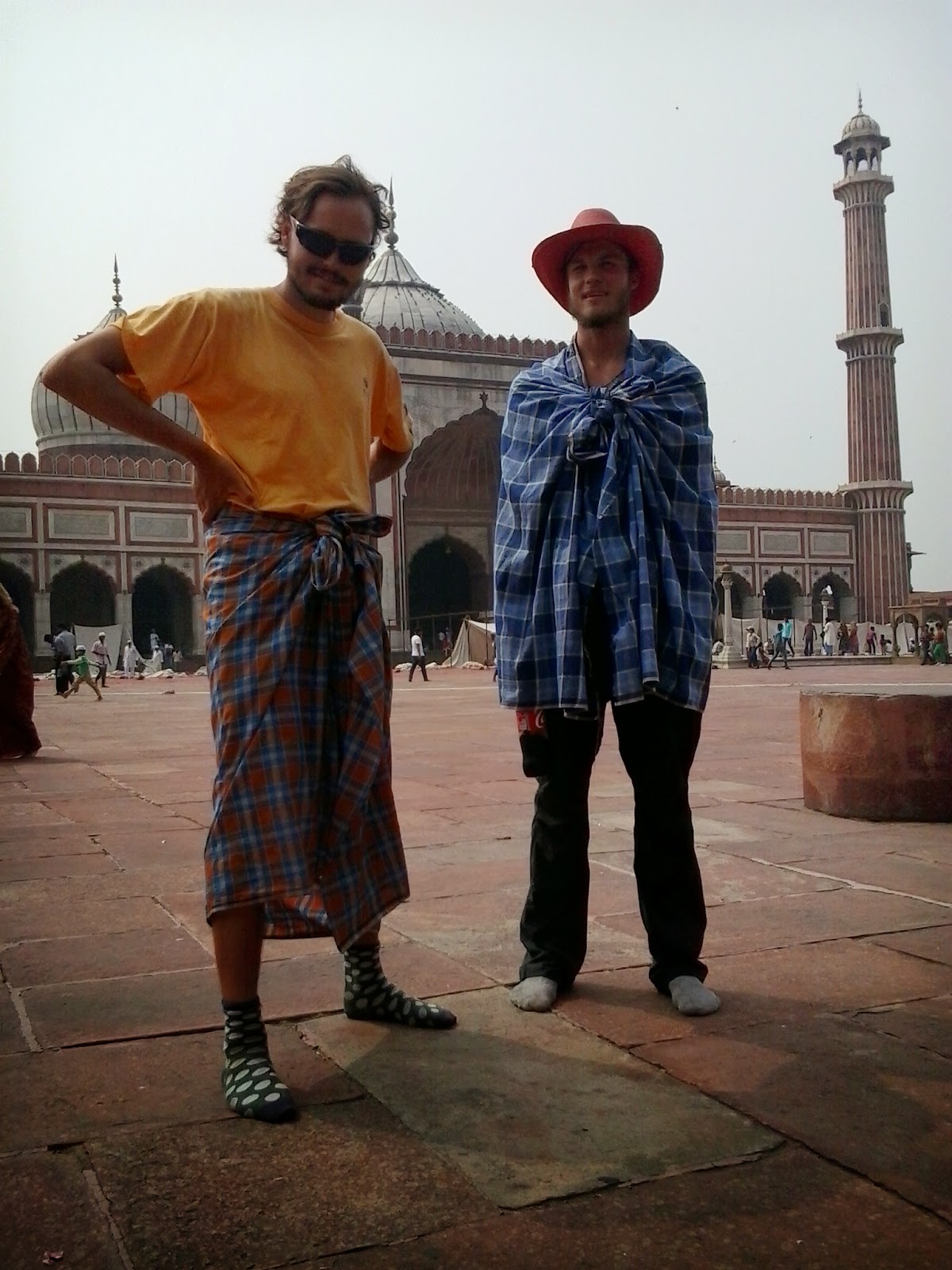 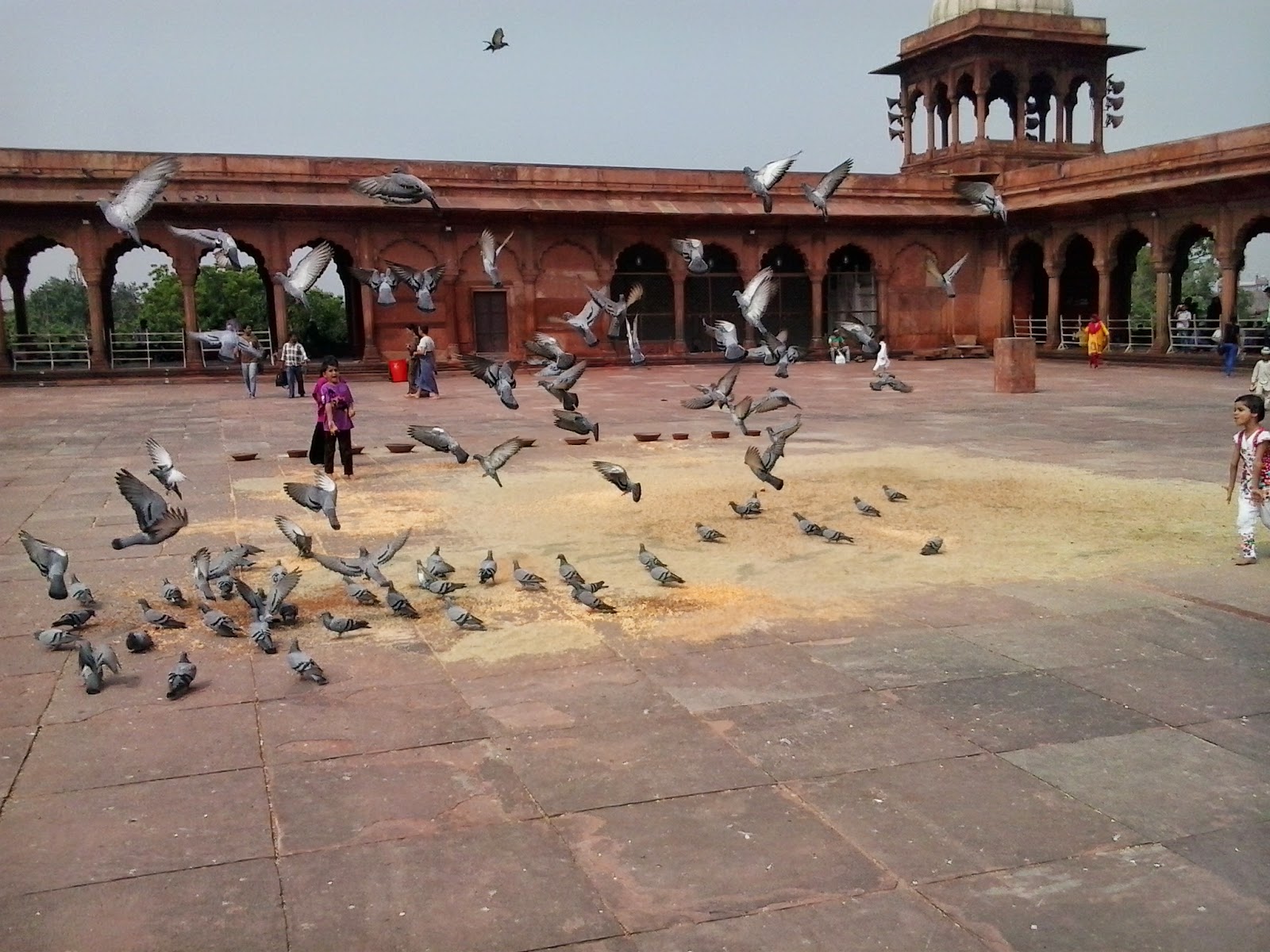 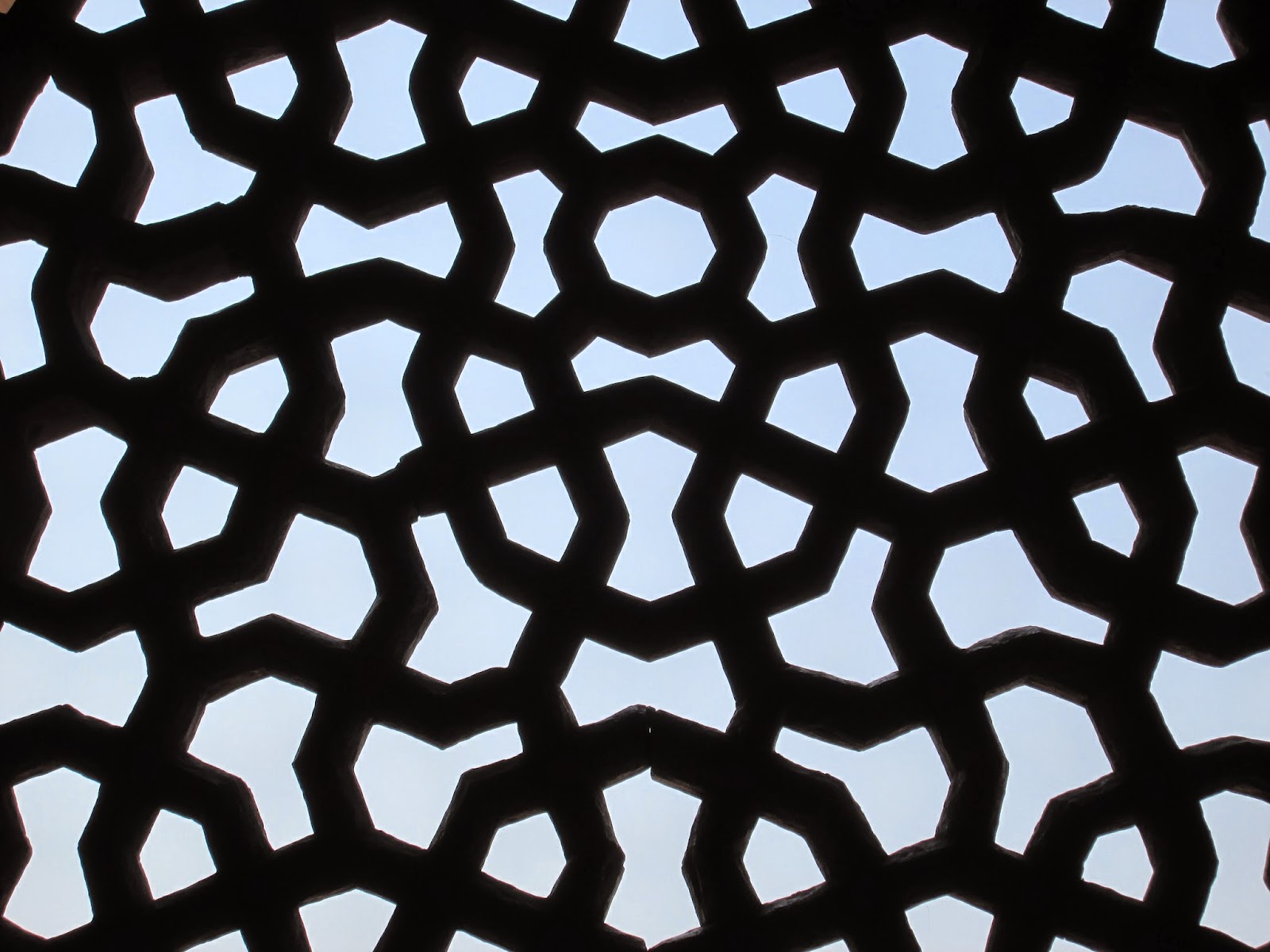 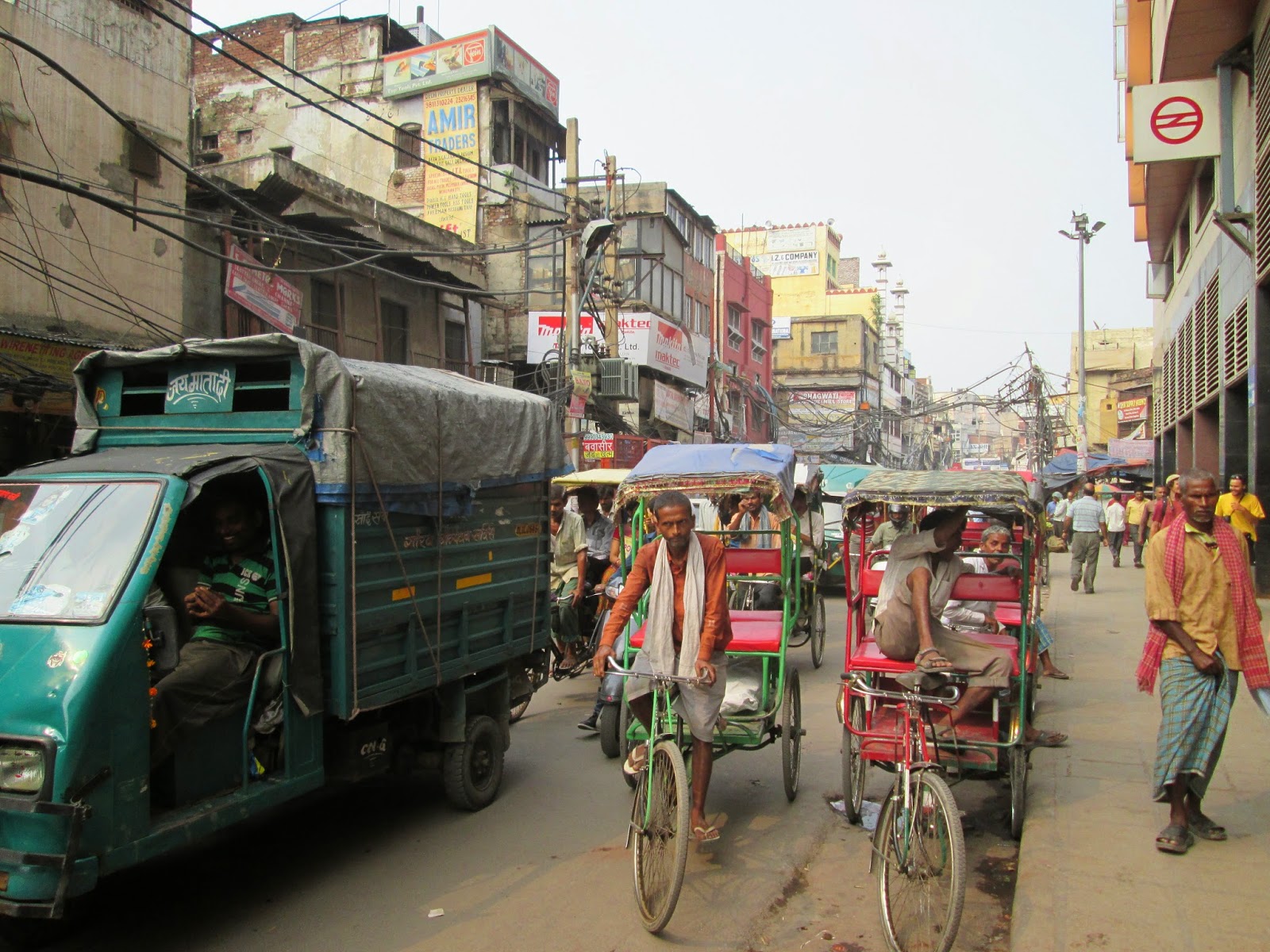 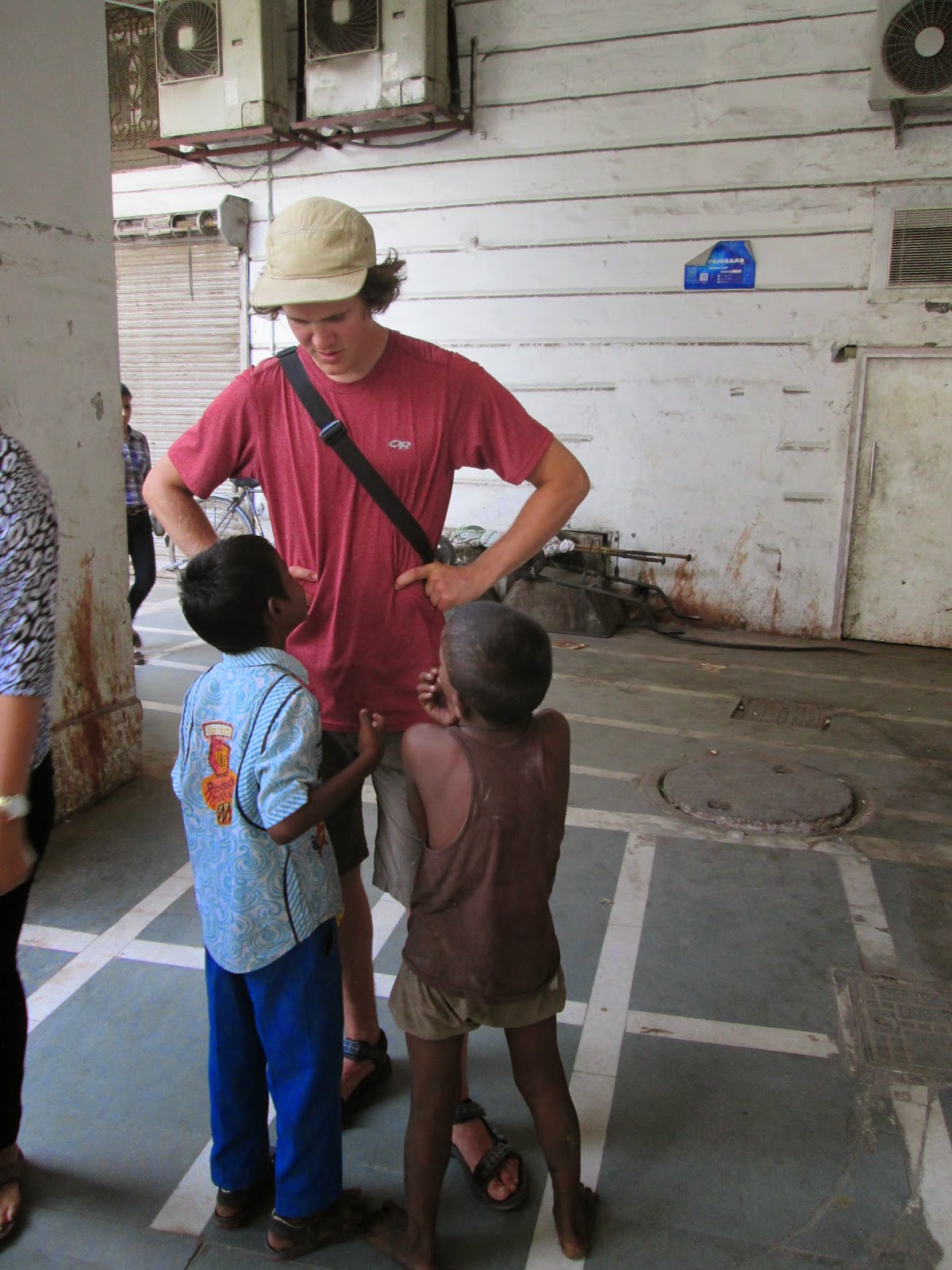